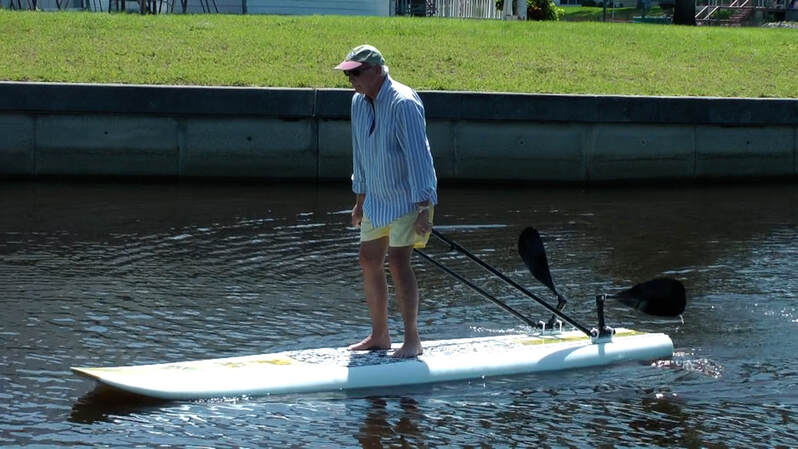 Supski on display could be a major driving force for this new innovative product. Anything as odd as the Supski should attract attention.

I intend to revolutionize the paddle board industry with my invention, the Supski and its sliding paddle track design. With a track length of six feet, its dual paddle system can "theoretically" deliver twice the power of regular paddle board paddling.

Key Aspect of This Product

The Supski is three products in one. Cross country skiing on water. Sitting down and rowing forward. Regular stand up paddle boarding.
With these three options to choose from, customer satisfaction with their purchase is virtually guaranteed.

​The global cross country ski market is over $1 Bn. The global home fitness market is over $10 Bn. With proper positioning, the Supski can cash in on these ever expanding markets. In addition, markets including senior citizens, sports health medicine and disabilities are highly targetable because of the design of the paddle system and what it brings to the fray.

A shelf ready Supski is in the final stages of development. What remains to be done is to complete the second of two competing designs.  One design incorporates a retraction spring in the mechanism (videos below) to assist the user in getting the paddles out of the water at the end of a stroke. This design allows for longer and heavier paddles to be attached to the sliding paddle system. It utilizes a wheel design for the paddle slide box in the track in order to offset the stress put on the system when rotational energy is applied and the spring is extended. The flex of the retraction spring must be able to hold the paddle horizontal to the water when not in use. The design without the spring slides in a patented track and requires no wheels but is limited to lighter paddle heads (which may or may not be an issue). The user twists their wrists to get the paddles out of the water at the end of the stroke. The final prototype testing should determine which system the public prefers. Upon completion, copies of the shelf ready prototypes will be distributed to influencers for further evaluation. Videos of all the tests will be edited together for advertising and marketing campaigns. Influencers will include cross country skiers, paraplegics, senior citizens, X-Gamers (for testing the Supski on the rapids), rowers, teenagers and of course regular paddle boarders. Influencers on social media with millions of followers will also be targeted.

A major driving force around the campaign is the Supski Challenge, a paddle board race unlike all the others which will take place between 90 to 120 days after the campaign has concluded. Sizable cash prizes for the winners will be given out as a means of promoting the Supski. Buyers from the crowdfunding campaign enter in the race event at a discounted price. Getting the races sponsored by a local beer distributor and producing a beer commercial featuring the Supski are additional promotional components of the ongoing campaign. I do video production (for over 35 years) so this will be a no brainer. The crowdfunding campaign will be timed to take place at the same time that the Supski is exhibited at Surf Expo in Orlando and Ski Expo in Denver. Commission sales people will target the sports medicine industry, disabled communities, retirement communities, retailers, destination resorts and any other markets determined to be exploitable by a direct sales force team. Supskis will be raffled off at paddle board races taking place around the world. Supski will also have product demonstration booths at the races.

The Supski can be sold as an inflatable or as a hard board. As an inflatable, the tracks attach to the paddle board with Velcro. As a hardboard, the tracks are embedded into the board allowing the top surface of the board to be completely flat. Because the sliding paddle system is separate from the board, paddle board manufacturers will become partners to produce the Supski equipped boards. For inflatable board manufacturers, all that is required is to incorporate the two Velcro strips required for attaching the tracks into their existing designs. They will simply cut two paths in the deck pad before it is attached to the board and then glue the Velcro into the two pathways created. 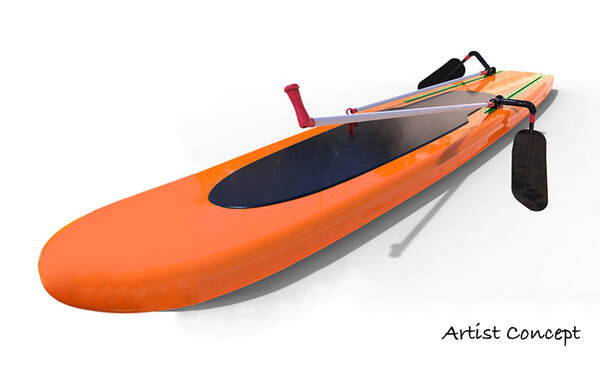 Hardboard manufacturers will be provided with the tracks and they will embed them into their boards, fiberglass the tracks in place and modify the deck pad as well to accompany the tracks. This will incentivize board manufacturers to promote the idea of pole paddling with the Supski. Because of their existing market share this can exponentially accelerate Supski sales. Additionally, the paddle heads can be removed and alternatives attached which means paddle manufacturers can be partnered with to produce different style heads. The dual paddle heads provide a perfect surface for attaching company logo decals for branding. ​

Introducing the inflatable with an average selling price of $600.00, a manufacturing cost of $225.00 and an acquisition cost per unit of $75.00, gross profit will be $300.00 or 50%. Year one sales goal is selling 2500 Inflatables for a total of $1,500,000. The hardboards are more expensive and will be phase two. Utilizing the plan outlined above I have established a goal of ten countries selling 2500 units each for a total of $15,000,000. The plan is solid. Shelf ready prototypes will prove market acceptance on how to proceed.

​The only existing defined competition is Nordic Track style exercise machines which cannot compete with the Supski outdoors. Hence, the only real competition is virtually all other products on the market chasing the disposable income of the populace. By following the outlined product launch program together with any additional concepts added, success can be readily achieved.

The cost to get the prototype design completed is $5,000. The cost of each prototype is approximately $1800.00. Depending upon how many units are distributed, shipping costs and promotional photo and video costs related to the prototype tests, a total of $40,000 to $50,000 is anticipated. The startup costs to pay for molds, initial product run and campaign to launch the Supski are anticipated to be$250,000.  Should the product's acceptance be successful additional capital may be required for expansion of inventory and related costs,

In 2015, I showed a video of the first prototype Supski to a gentleman on the Lake Trail in Palm Beach. He turned out to be Richard Hirsch, president of Welbilt Corporation, a family's business. Richard analyzed the product and the market and offered to put $500,000 into the Supski, $250,000 for product development and $250,000 for inventory and product launch. However, he wanted 80% ownership in return, 40% for each phase. On advice from family and friends, I did everything I could to try to negotiate a better deal but Richard wouldn't budge and ultimately we parted ways. Hindsight being what it is, I should have taken the offer because too many years have passed and the Supski could have already been on the market. Having said all that, Richard valued the company at $625,000 pre-revenue. I believe the last six years which I have spent advancing the design and prototype accounts for around 75% of his proposed prototype development costs. With the explosion of inflatable paddle boards which enhances the Supski's value tremendously as well as inflation, I believe Richard's evaluation in today's terms would be $900,000. So an investment of $50,000 for completing the prototype will receive 5% equity. The additional $250,000 for the product launch will receive 25% equity for a total of 30% equity in Supski Manufacturing Corporation.

In addition, I was invited to be a guest on Adventure Capitalists, an offshoot of Shark Tank. Unfortunately I didn't have a shelf ready prototype so I didn't qualify. Besides interested buyers, the concept of the Supski has been validated which is why I continue working on it to this day.

I cannot move forward without you.

I believe the Supski can be a successful product because of the numerous markets which campaigns can target. A $50,000 investment is necessary to determine whether the second round makes sense. So it's a $50,000 gamble with a unique product that can ride on the coattails of an ever expanding industry, paddle boarding. If you can see the vision and possibilities, you'll know it's worth the risk.

Components that make up the Sliding Paddle System 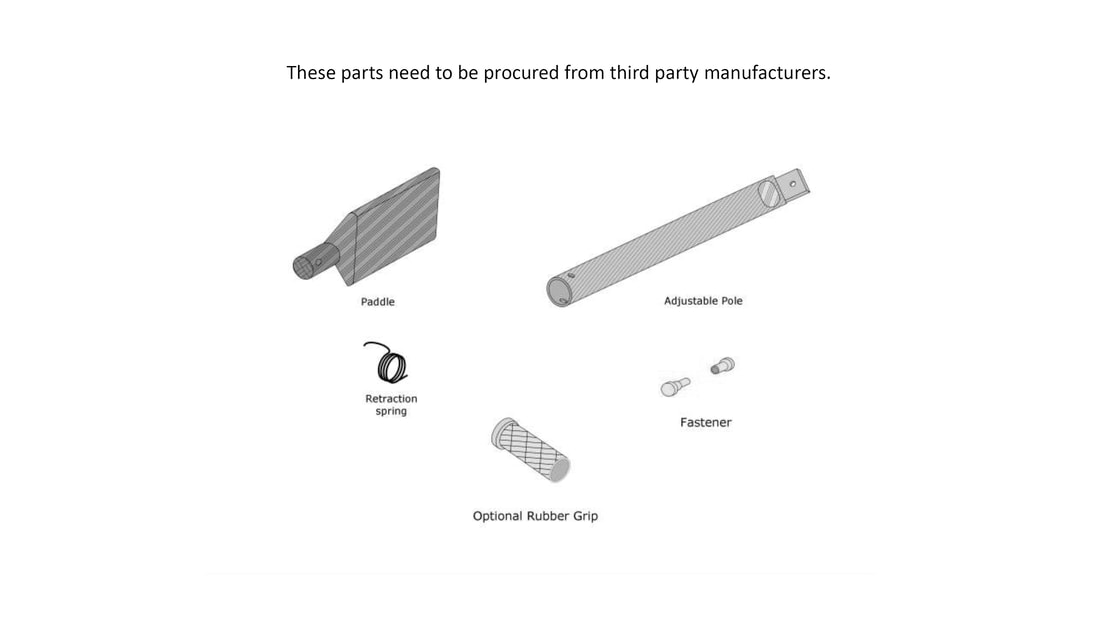 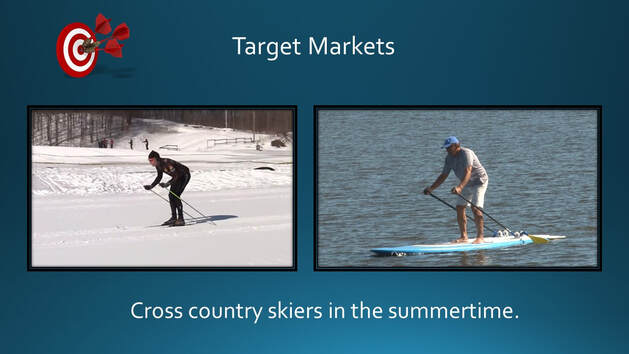 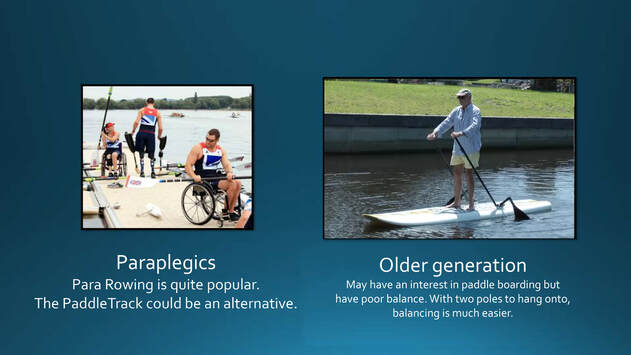 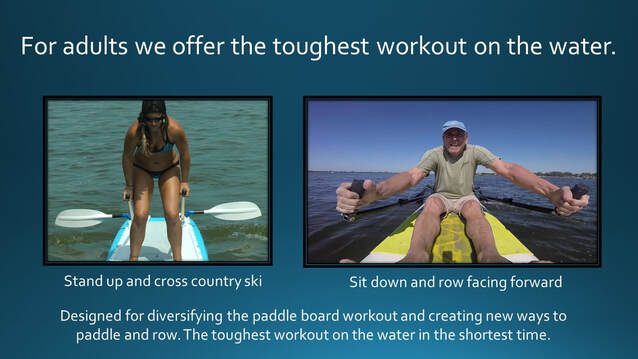 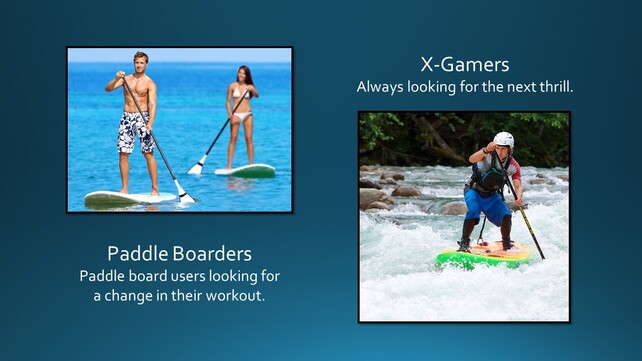 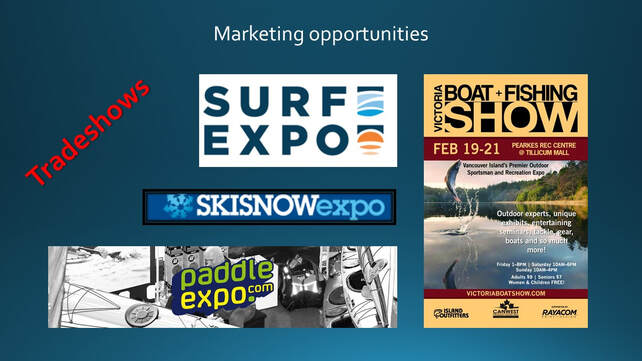 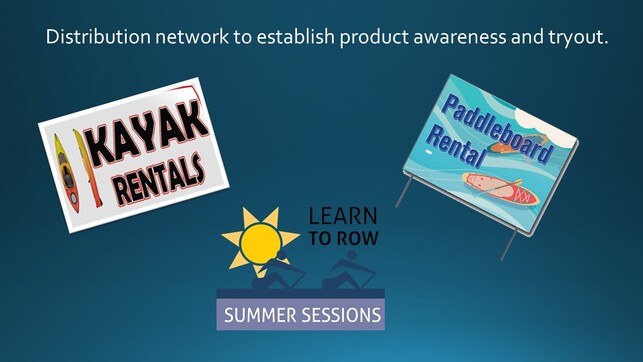 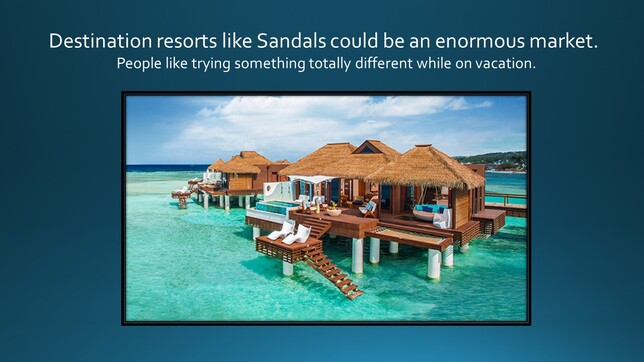 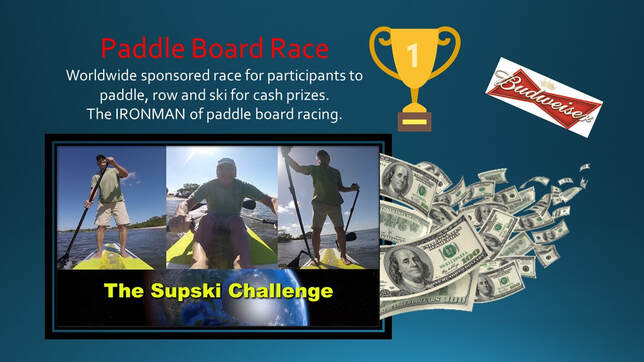 Two kids watching a video world's of the first Supski at Surf Export in 2015.